“And since in God’s plan it has been established as an ‘intimate community of life and love,’ the family has the mission to become more and more what it is, that is to say, a community of life and love, in an effort that will find fulfillment, as will everything created and redeemed, in the Kingdom of God. Looking at it in such a way as to reach its very roots, we must say that the essence and role of the family are in the final analysis specified by love. Hence the family has the mission to guard, reveal and communicate love…”

Scientology’s practices of Disconnection and Fair Game were created to ostensibly attack, punish, crush and forcibly drive the victim either to crumble under the pressure or return to the fold.

These policies of hate, anger and destruction are capstones in the cult’s arsenal for compelling obedience.

Wielded as weapons of control, Scientology hangs the fear of losing loved ones over the heads of it’s members like the blade of a guillotine. It is always there, waiting to drop with surgical finality, severing the bonds between parent and child, spouses and siblings. As if the loss of a beloved were not enough, the remaining member, in order to prove his or her loyalty and dedication to the cult, must then participate in a campaign of scathing attacks against the disconnected.

Accusing, deriding and mocking the apostate even if it means lying, Fair Game as laid out by LRH is designed to destroy another person simply because they leave the cult and decide to speak out.

From the Scientological stand point, Disconnection and Fair Game are outward directed. They are policies designed to protect the cult and punish the apostate.

The problem (one of many) is that Disconnection and Fair Game hurts more than just those on the outside.

Case in point, Taryn Teutsch and her campaign against her own father, Mike Rinder.

She was there on that day in 2010 when she and her mother and uncle confronted Mike in the physician’s parking lot. Brainwashed or not, she knows exactly what happened.

The human mind is an amazing thing. You can lie to yourself as much as you want even to the point where you begin to believe your own lies, but somewhere deep inside there will be conflict between the truth and those lies. It is difficult to reconcile what your own eyes have seen and what your lips are saying to the contrary. There is going to be some discomfort somewhere no matter how muffled one’s conscience may be.

All one needs do is go back through the photographs Taryn posts on her Twitter page to watch a steady progression of darkness. By constantly lying and falsely accusing her father of heinous acts, Taryn is doing herself harm as well.

Every lash of the whip has a recoil and it scars her just as much as it does her target.

I know some believe that someone else is controlling Taryn’s account.

I don’t believe that. She is the one in the videos making the accusations. She is in the photographs. Her bitter and angry mother may stand behind Taryn, continuing the abuse of Parental Alienation, but there is no doubt that Taryn is involved in this Fair Game campaign and it is costing her.

I do not condone what she is doing to her father. The lies are horrible and destructive.

She needs to be stopped because she is causing harm not only to Mike Rinder, but to many innocent people who have become caught up in her net of anger. What she is doing is wrong and completely unethical by any standards other than those of Scientology. However to think that she is not also a victim of her choices would be naïve.

Scientology calls itself a religion. It claims to have the highest of ethics and to have the only way.

The gilded face it shows to the world is one of benevolent humanitarian dedicated to freedom for all.

Ignoring the fact that there have been moral strictures in place for the betterment of civilization for time immemorial, they proclaim their ‘discovery’ of The Way To Happiness as the path to joy.

Scratch off that thin shine and peer underneath and one sees a much darker entity.

Where religion blesses the family unit and encourages community, Scientology works instead to alienate and isolate family members and undermine the trust and love found in both family and friendships.

In their self absorbed condescension they believe that cutting someone off from the love and support of their family will strengthen the cult unit by removing any potential individuality.

If that apostate refuses, even through his pain, to re-embrace the destructive mentality and chooses instead to speak out against the abuse, he is attacked viciously and without mercy.

That fact is that while Scientology tells itself Disconnection and Fair Game are good for the greatest number of dynamics, it could not be more wrong.

Forcing a daughter to attack her own father out of fear is not anything a real religion would condone. Putting a child between her parents is emotional abuse of the highest order.

Taryn is making her choices based on what she is told and taught. She is trapped in a very dark place and when one is in the dark it is impossible to see clearly.

Her actions are horrible, her lies unconscionable.

That she is hurting innocent people and damaging the credibility of honest organizations who are diligently working to eradicate domestic violence is horribly selfish. Her tirade needs to be stopped and her account needs to be removed.

However, there is a flip side to all of this.

The harm that is done to those who face Disconnection and/or Fair Game affects those who perpetuate it as well. The Scientologist does not escape the backlash nor are they made somehow better by their adherence to these strictures.

What she is doing is an extension of and prime example of what Scientology truly is. If one wishes to know what Scientology believes in all one needs do is read Taryn’s attacks on her own father and then look into her eyes in her pictures.

Taryn Teutsch is the face of Scientology Disconnection and Fair Game. The toll such constant anger and hate that these policies takes on the attacker can clearly be seen in her eyes.

Is she to be pitied?

Is she to be despised?

Just look into her eyes… 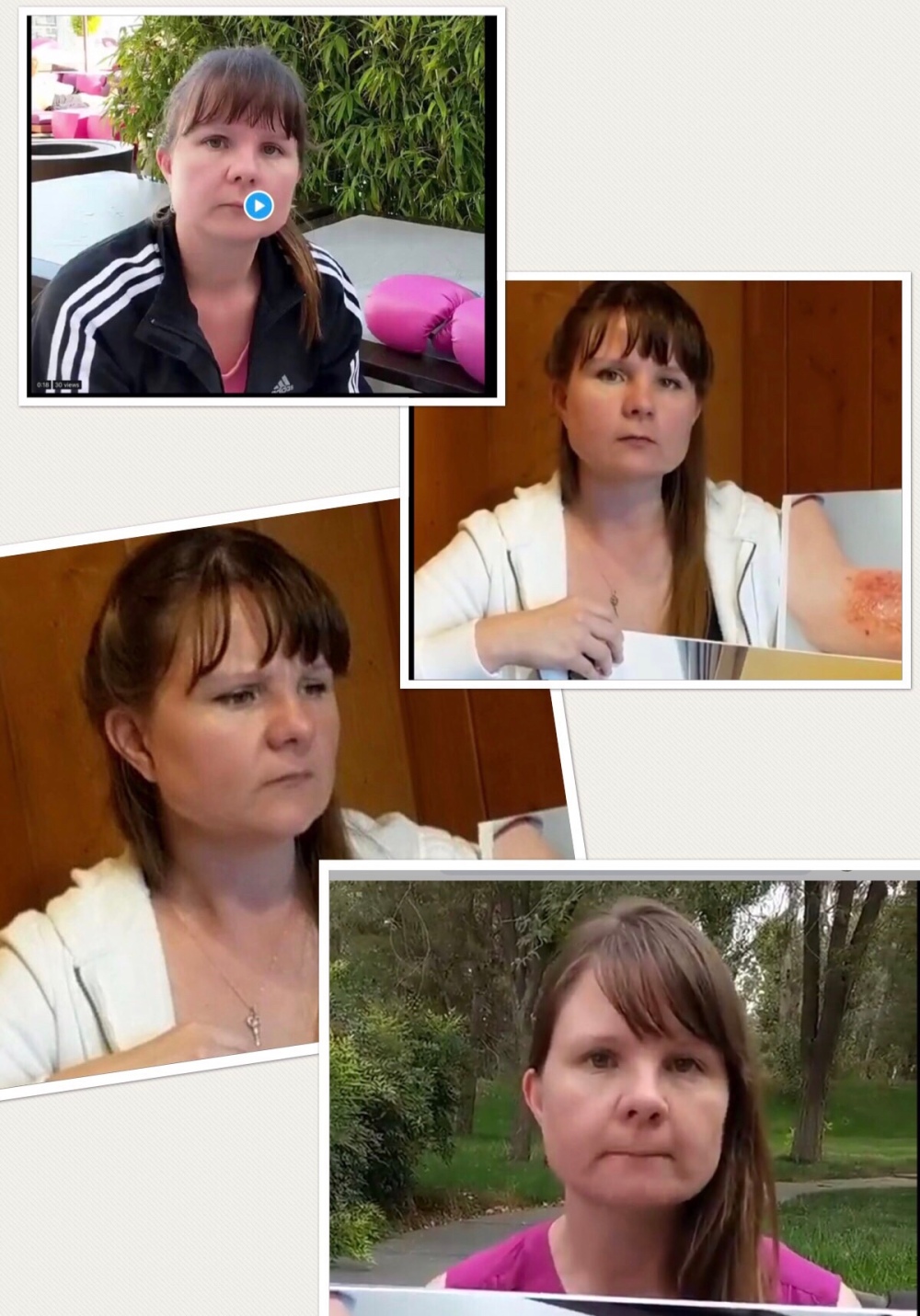