“THE DYNAMIC PRINCIPLE OF EXISTENCE IS SURVIVAL.

The goal of life can be considered to be infinite survival. Man, as a life form, can be demonstrated to obey in all his actions and purposes the one command: SURVIVE!”

Usually when one thinks of “Survival” there is a negative attached.

Survival at sea, survival in the wilderness, cancer survivors.

The word connotes a fight, a struggle to overcome some terrible threat. One seldom hears the word used in connection to some happy, positive event.

“My family and I survived the most wonderful vacation in the Bahamas!”

Survival is a basic, bottom line thing. It is existence in its barest form.

When lost in the forest there are basics necessary to survival; food, shelter, water and fire. Once these things are addressed the chance of living through the experience rises exponentially but it is still a fight.

Man has basic needs that must be met for survival but is that really all he desires for his life?

Is survival really the goal of life?

Scientology seems to think so and what a sad sort of life to aspire to.

Survival is the state or fact of continuing to live or exist, typically in spite of an accident, ordeal, or difficult circumstances. Isn’t there more to life than just the constant struggle? The ordeal?

Does Man really only strive to survive?

Or do we want to thrive?

According to a recent tweet by @ExposeNetwork “The term “survival” within the religion of #Scientology is the equivalent, comparative theological idea to what #Buddhists call moksha or “releasement” and to what #Christians call “salvation” or “redemption.” – Prof. Religious Studies”

Once again the author of @ExposeNetwork shows his ignorance of true spirituality.

Salvation is not survival.

Survival is not redemption.

Where survival has a negative connotation, salvation is positive and joyous. For the Christians that @ExposeNetwork references, salvation is freedom from the wages of sin. Through Jesus’ death and resurrection He achieved our salvation. Scripture is clear that salvation is the gracious, undeserved gift of God (Ephesians 2:5, 8) and is only available through faith in Jesus Christ.

Salvation and faith go hand in hand and both are gifts from God.

Scientologists do not believe that Jesus is our Savior, rather that they are the only ones who can save Mankind.

Members of COS are apathetic at best about God. Hubbard wrote that God was a false implant designed to mislead.

In any case, there is a definite absence of God in Scientology doctrine. There is simply no reason or room for God because the bottom line is that the Thetan takes God’s place.

By Scientology definition the Thetan is the “Creator of life itself”, it is immortal, creator and capable of godlike powers. So where does God fit in?

He doesn’t. He is extraneous to the Scientology way of thinking.

With God simply an afterthought and Jesus even less there can be no salvation, no acceptance of the gift God bestows.

To attain salvation one must have the faith to believe.

“A definition of the Christian doctrine of salvation would be “The deliverance, by the grace of God, from eternal punishment for sin which is granted to those who accept by faith God’s conditions of repentance and faith in the Lord Jesus.” Salvation is available in Jesus alone (John 14:6; Acts 4:12) and is dependent on God alone for provision, assurance, and security.”

By refusing to accept Jesus as the Savior, Scientology refuses the gift of salvation which does indeed leave them surviving rather than joyfully thriving.

There is so much more to life than mere survival. Scientology teaches its members not to take anything on faith, it has replaced God with technology and has no Heavenly hope.

There is no true God in Scientology and the Catholic definition of Hell is the absence of God.

The Scientologist seeks to survive.

The Christian seeks to LIVE.

Redemption is the action of saving or being saved from sin, error, or evil. Again it is a positive, freeing action. Scientology teaches that Mankind is not touched by sin, therefore he is not in need of redemption or salvation. Yet one more of COS’ confusing claims in that they also assert that they are the only hope and salvation for Man.

To live a life freed from the darkness of sin, to be redeemed, is to live in the light. Christians are exhorted to “Rejoice in the Lord always. I will say it again: Rejoice!”

Scientology may forgo faith and joy in their fruitless quest of Clearing the Planet, a quest that costs friendship, community and family, but for Christians the path has already been Cleared.

Christians do not have to spend their days in some isolated, angry, duty.

They are already saved and can spend their lives in joy and celebration, in giving thanks to God for His gifts of Love and Faith.

There is simply nothing comparative theologically between Scientology’s idea of “survival” and Christian “salvation”.

The other is Freedom. 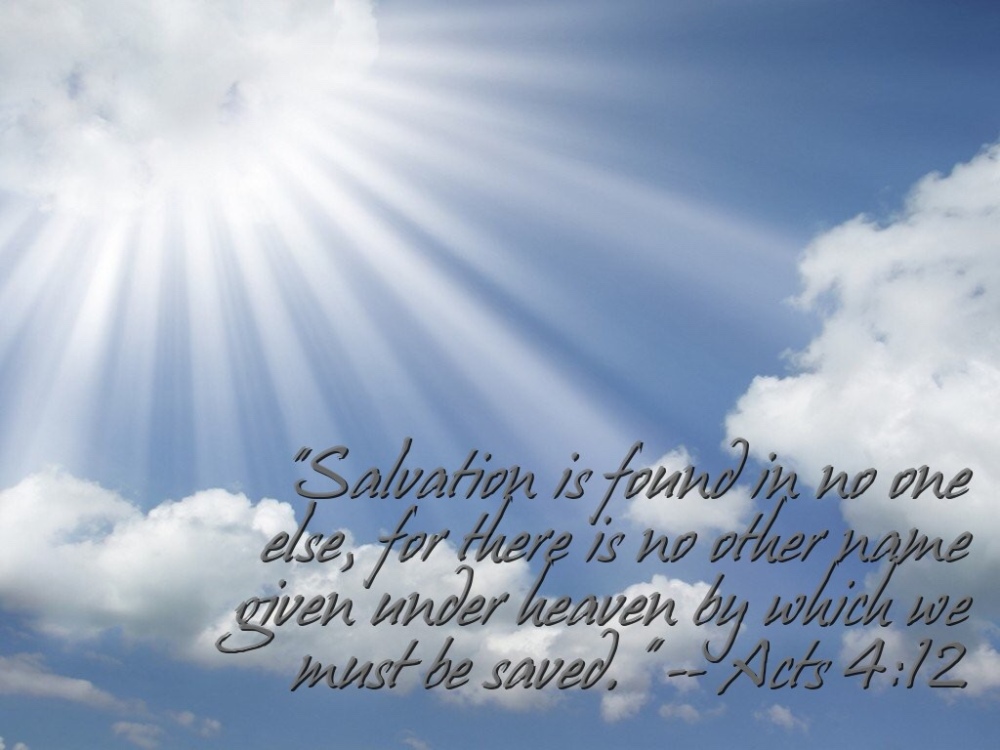 One thought on “Survival or Salvation, They are not the Same”