Scientology’s Volunteer Ministers group is the cult’s best prop for their self aggrandizement.

Known for their bright yellow shirts, matching tents and dramatic photographs of their presence at disasters both natural and man made, their catch phrase is “Something CAN Be Done About It”.

There is nothing Scientology loves better than a good shore story, anything to show that bright, humanitarian face to the world.

Part of their argument for being a religion is their insistence on the truth of their dedication to helping all Mankind, especially during times of crisis and disaster. This charitable donation of time, talent and energy is always conveniently caught on camera then promoted across social media and on their websites.

Grim faced determined men and women wearing heavy gloves, rakes or shovels in hand are shown arriving at the aftermath of a devastating hurricane or tornado.

This is the front Scientology uses to extol their impact upon all of the Planet.

Even in the face of a frightening, potentially deadly pandemic, the Volunteer Ministers are undeterred in their dedication to good works.

Currently the Volunteer Ministers’ Newsletter carries a story of their incredible efforts on the Colombian border aiding a Catholic church in Cúcuta in providing support to thousands of Venezuelan refugees.

The newsletter piece dramatically declares “A team of Colombian Scientology Volunteer Ministers (VMs) has been providing relief to thousands of refugees who cross the border from Venezuela to Colombia each day. In a shelter established by a Catholic church in Cúcuta, VMs have helped prepare and distribute food to the refugees each day. On one day, five VMs served 13,000 meals while also caring for 2,000 children from nearby schools.”

This is a staggering figure for anyone to envision.

Five stalwart Scientologists never leaving their posts, hour after hour serving refugee after refugee. Not satisfied with just providing tens of thousands of meals to this displaced flood of humanity, they diligently care for 2,000 children.

Five people watching out for the well-being of 2,000 children.

All in just one day.

Interestingly, the article leaves out any details about the Catholic church’s actual part in all of this humanitarianism. It’s mentioned in passing, almost as an afterthought as the focus is placed upon Scientology’s incredible achievement in succoring the masses.

What Scientology dismissively refers to as a “shelter” is actually called Divine Providence House of Transit and since its opening June 5th, 2017 has, according to the Catholic Diocese of Cúcuta in Colombia provided one million meals to Venezuelan migrants affected by the humanitarian crisis in their country.

One million meals since 2017 raises some questions over Scientology’s elaborate claims of 13,000 meals served in one day. Serving such a number over a year’s time would be 4.745 million meals, far more than the Diocese states for the entirety of it’s existence so far.

Father José David Caña Pérez is the leader and coordinator of Divine Providence (aka “a shelter”) in the border city of Cúcuta referenced by the Volunteer Ministers.

In addition to the Divine Providence transit house, the diocese also has eight other soup kitchens in the area to help meet the demands of the multitude fleeing Venezuela due to societal and economic issues in their country. Even so, none of these charitable locations is actually dealing with the numbers quoted by Scientology.

According to Father Pérez approximately 3,800 to over 4,000 hungry exiles seeking food, shelter and basic necessities arrive at the transit house daily.

His statistics cast serious doubt on the assertions made by the Volunteer Ministry Newsletter piece. It would be impossible to feed 13,000 people a day if they don’t exist in those numbers.

Wanting to get to the bottom of these claims Scientology makes to impress their readers, we contacted Father Pérez directly through his Facebook page.

Sending him the pertinent statistics from the article we asked the the good Padre for confirmation.

In response he replied, “Hello, they were visiting the house of passage. They took a photo of the work. Nothing else. I don’t know if they helped in praying.”

Once again Scientology is caught in their lies.

Sure wish something could be done about it. 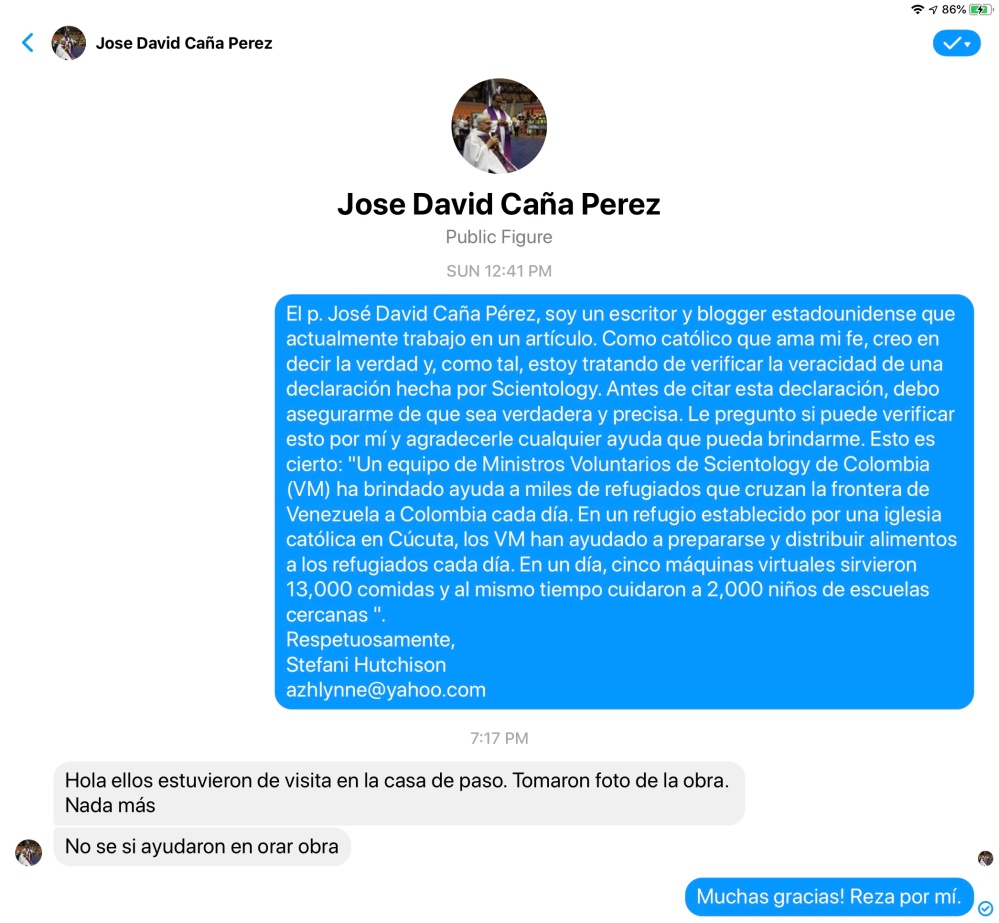 10 thoughts on “Volunteer Ministers: Just Passing Through For A Photo Op”