On the 15th with the month half over, Scientology’s Stand League posted an article marked “For Immediate Release” announcing that May is Jewish-American Heritage Month.

The short piece is comprised of a brief, sanitized timeline of Jewish history leading to their arrival in America and a nod to President Bush for dedicating May to the Community in recognition of their contributions.

Without mentioning any of the “events” planned during this time of lockdown and social distancing, the author writes, “Though events celebrating Jewish-American Heritage Month will be at a minimum due to the present pandemic, several websites offer interactive opportunities to participate in marking the occasion and honoring those whose contributions form so much of the fabric of America.” This is followed by a link that doesn’t lead to any of the interactive opportunities aforementioned but rather to the Jewish Heritage Month website.

Stand League’s writer, whomever he or she is, (*ahem* Edward Parkin) obviously never took the time to peruse the site. Endeavoring to appear serious and dedicated to their claims of inclusion and tolerance, the writer dashed off this bit of empty fluff without ever actually checking their work for accuracy.

JHM’s website explains it’s purpose “This site presents only a sample of the digital and physical holdings related to Jewish American heritage available from the Library of Congress and other participating agencies.”

Also, “This Web portal is a collaborative project of the Library of Congress and the National Archives and Records Administration, National Endowment for the Humanities, National Gallery of Art, National Park Service, and United States Holocaust Memorial Museum. The contents of this site highlight only a small portion of the physical and digital holdings of the participating partners.”

Semantics being one of Scientology’s favorite games, one could argue there are interactive opportunities. Clicking the various links provided on the site will result in the opportunity to visit other sites. That is interactive.

However, Stand League leaves the reader believing that their link leads to special activities to celebrate and be involved. There are no “events” nor, in spite of the statement, are there “several websites” offering interactive opportunities in the way they obviously meant.

“Jewish-Americans, despite being continually marginalized, targeted and blamed for social ills, have excelled and contributed immensely to their adopted homeland—in the arts, the sciences, statecraft and philosophy.”

Herein lies the hypocritical crux of the story.

Scientology has welcomed and accepted the Nation of Islam deep into the fringes of their world. A match made in The Inferno, COS has embraced their participation even to awarding their Freedom Medal to Nation of Islam Minister Tony Muhammad.

Muhammad is a staunch supporter of the anti-Semitic three book series, “The Secret Relationship Between Blacks and Jews.”

More, Muhammad is an outspoken advocate for all that the NOI teaches and believes in: hate, division and anti-Semitic bigotry.

Louis Farrakhan is infamous for his ugly comments concerning the Jewish Community.

“‘Did you know that pedophilia, homosexuality, sex trafficking, is the work of Talmudists'” Referring to several Jews accused or convicted of crimes, he added no one was talking about them, ‘Because Talmudic, satanic Jews are the ones that feel nobody has a right to punish them for what the Talmud has made lawful to them.’”

“Jews were responsible for all of this filth and degenerate behavior that Hollywood is putting out, turning men into women and women into men…. White folks are going down. And Satan is going down. And Farrakhan, by God’s grace, has pulled a cover off of that Satanic Jew, and I’m here to say your time is up, your world is through.  You good Jews better separate because the satanic ones will take you to hell with them because that’s where they are headed.”

During his 2017 Savior’s Day Speech Farrakhan said “that contemporary Jews are “not really Jews but are in fact Satan.” He went on to describe Jews as “great and master deceiver[s],” and encouraged his followers to consider Jews “the enemy of God and the enemy of the righteous.”

Scientology’s partner in hate, the NOI, blames the Jewish community for being involved in the 9/11 terrorist attacks as well as being complicit in the Holocaust.

Stand League’s writer fails to mention any of this in his shallow attempt to show solidarity and support for Jews targeted, persecuted and “blamed for social ills.”

Frankly, this article is a barely camouflaged insult.

The writer waits until half the month is passed before even thinking of mentioning the commemoration. He couldn’t be bothered to take any time confirming whether his link was accurate or not.

Parkin, if it is him, cared less whether what he wrote even resembled accuracy, “several websites offer interactive opportunities to participate in marking the occasion and honoring those whose contributions form so much of the fabric of America.”

As for the contributions he hints at but can’t be troubled to mention, not the least of these include the Judeo-Christian values that serve as the foundation upon which our country was built, whose basis can be found in the Ten Commandments. Values which ironically form the basic template for Scientology’s own Way To Happiness, though they’d deny it.

Once again Scientology cares more about shallow appearances, on the illusion of world wide acceptance, inclusion and care. Again this cult of deceit puts on a show for their own benefit, dons a beautiful mask that covers their two-faced indifference, that hides their reality.

Stand League’s article, breaking news “For Immediate Release”, is a collective slap in the face of the Jewish Community. Salt rubbed in wounds consistently inflicted by their bedfellows, the Nation Of Islam.

COS awards their highest honor upon a man whose life is testament to hate, recognizing and lauding him for his humanitarianism, all while claiming to honor and support the very people he disparages and reviles. 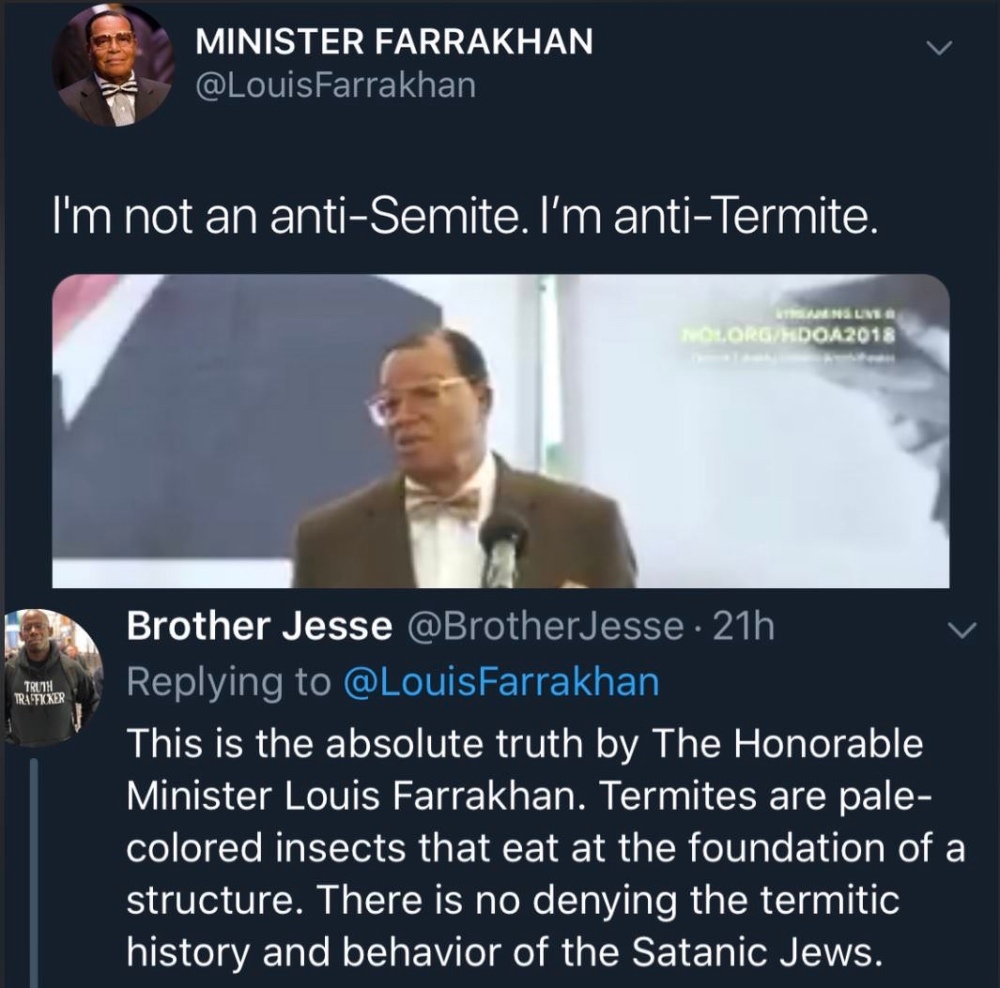 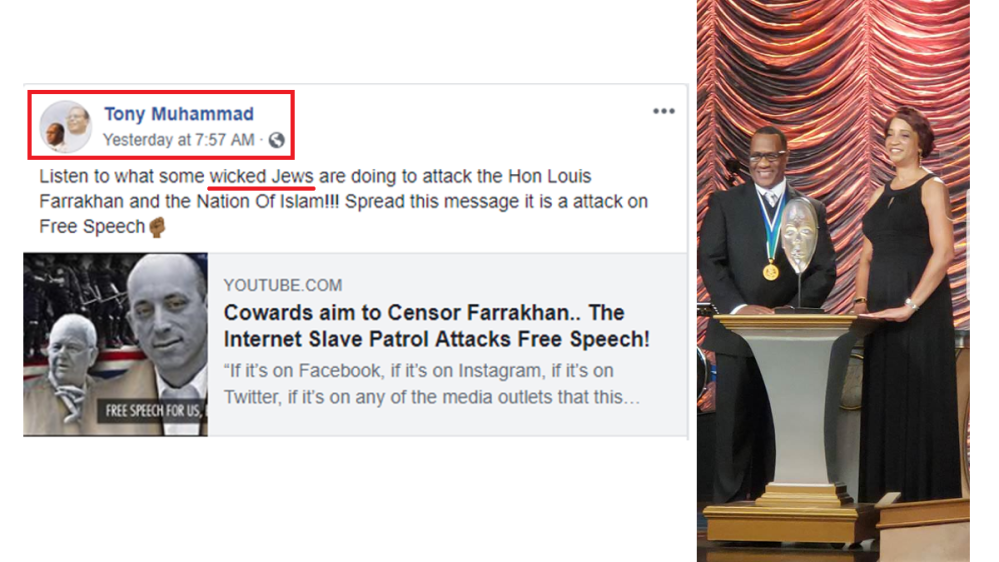 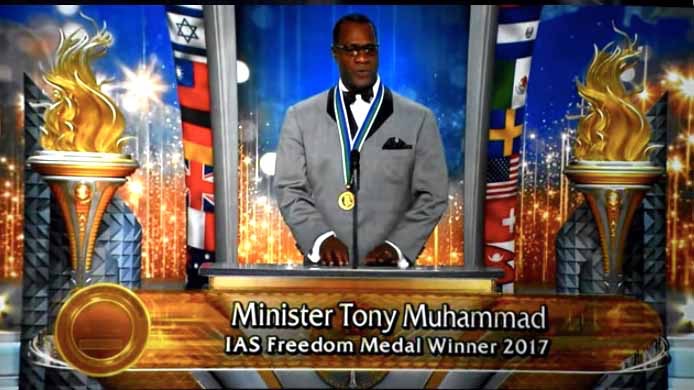