Marty Rathbun has hitched his already questionable wagon of misinformation to a group of Scientology Fair Game supporters in order to further his and OSA’s mission.

After all, is not the enemy of my enemy my friend?

In his current blog, attacking Leah Remini, we find the usual inability to provide either facts or honesty.

“Leah Remini lashes out on the air, on twitter or facebook and ASC (Anti Scientology Cult) cultbots immediately take reckless action in efforts to destroy her perceived enemies.”

Clearly a disingenuous statement by Rathbun, he definitely has a misunderstood word that needs clearing.

Lashing out in reckless action in efforts to destroy is a completely different behavior (AKA Fair Game) than speaking out against…well…the very thing Marty describes.

Deliberately twisting facts, recreating reality to suit and constantly attacking people for no other reason than spleen is definitely wrong no matter how hard Hubbard tried to justify it.

Lying for the “greater good” is a double negative that cancels out any hope of positive outcome.

When one needs to fabricate conspiracy theories in order to not only deflect from real issues but to incite others to hate and suspicion there is a serious problem.

Going even further, embracing the idea that one somehow has the inalienable right to harass and attack another with impunity takes the situation from merely immoral bullying, straight into unbalanced narcissism.

This is fully proven when one considers that Marty, and those he is now championing, lives under the false assumption that while it’s acceptable for him (them) to constantly attack, lie and mislead it is completely unacceptable for those he (they) target to defend themselves.

Further proof of this mindset can be seen on various Twitter, WordPress and Facebook sites where like minded individuals gather to tear their victims apart while self righteously shouting their tolerance of all opinions to anyone foolish enough to listen. All is well and good as long as there is complete agreement and unchallenged toadying, yet let anyone speak a differing thought and there follows an immediate chain of intolerant, condescending, argumentative snark.

Typical Scientology tactics, “always attack, never defend” that seems to include all that makes Fair Game so undeniably ugly.

That Rathbun and his cohorts fail to see that they are the ones lashing out, resorting to lies to support their narratives is exquisite irony and hypocrisy in the extreme.

Leah Remini has chosen to speak out against unimaginable abuse. Her decision is no different from those victims of sexual predation by Catholic priests, Baptist pastors or Jewish rabbis who speak out. Choosing to be a voice against anything or anyone who preys on others is not lashing out, not bigotry, not hate.

Defending those who engage in such unpardonable actions, attacking those who speak out against them; these are indeed examples of lashing out and hate.

While Rathbun et al must twist truth in order to make their points, Remini, Rinder and those who participate in the platform of exposure and healing do nothing more than relate their stories without the need for creative editing or dramatic artistic license.

Rathbun states, “A couple years back a woman heard Remini and promptly attempted to ram her automobile into a building coming up a few feet short of a children’s nursery.”

Erin McMurtry was the woman’s name.

Earlier in the evening before the crash, Erin’s family had expressed their concern over her behavior and she’d already been arrested once.

“According to the New York Daily News she had been acting strangely earlier that night. After the incident, concerned family members reported her to the police where she was then arrested. She apparently had been breaking bottles and throwing things at her friend’s businesses.”

While McMurtry did post a link on her Facebook page to a 20/20 news show that discussed Troublemaker, her actions were not a “prompt” response to anything done or said by Remini. The hit and run took place four days after this posting.

Furthermore, in her questioning by police McMurtry never once said a word about either The Aftermath nor Leah Remini. She was very vocal about her feelings concerning Scientology, she was also clear about her motivations, “McMurtry tried to justify her religious fender bender by claiming Scientology was evil because its members blackmail people, cops said. ‘I lost it. They’re a terrible organization disguised as a church,’ she told police. ‘I wouldn’t walk into that church, I would drive into it.’

She later told cops that her hit-and-run was not the best way to spread her anti-Scientology message. Before crashing through the church, she was looking for a rock to hurl through the window first, police said.”

Marty Rathbun writes, “Though clearly Remini inspired her terrorism, Leah scoffed at the notion that mere words have consequences (when it comes to herself).”

Was her attack prompted by watching The Aftermath or was watching the show just part of her already existing hatred for the cult? Can Scientology or Rathbun know what was in this obviously mentally ill woman’s mind?

Can anyone legitimately blame Remini for Mcmurtry’s actions?

No more than anyone can blame Jodi Foster for John Hinkley’s shooting of President Ronald Reagan.

Where did Leah Remini scoff at or dismiss this event? To our knowledge Remini never addressed this or any other of the myriad of false accusations leveled at her by Scientology or their supporters.

One supposes that living in a cult that believes in never ending lifetimes, time would be relative. For Rathbun, “recently” is over a year ago and once again Rathbun has absolutely nothing to proffer linking Remini to this alleged incident.

Making Leah Remini responsible for the choices and actions of everyone who even hears her name is ridiculous. Controlling the masses may be an OT power bestowed upon eager Clears in Scientology, but surely if Remini had such telekinetic ability Scientology would no longer be an issue? Wouldn’t such an incredible gift allow her to free those trapped within it’s razor wire topped walls?

“This week, Remini took to the airwaves and twitter pronouncing me Fair Game once again. Her adoring cultbots immediately responded by attempting to hack my wife’s bakery google, facebook and twitter accounts. Cyber lynching back on.”

This week Leah Remini and Mike Rinder’s podcast was aired and it covered the issue of the missing Heber Jentzsch and one family member’s attempts to see him. Leah also addressed the outrageous act of Edward Parkin, a so-called “minister” of a “church” taking to social media to body shame women.

Whatever Rathbun heard pronouncing him Fair Game is not sourced, linked to or directly quoted by him. For all who listened to the latest podcast this statement will be new information to them. If there have been any hacking attempts, Rathbun must be a computer wizard of governmental intelligence proportions to be able to identify Remini or any of her fans or supporters as the source. Perhaps his incredible talents could be put to better use with law enforcement in hunting down the multitude of Nigerian scammers preying on the unsuspecting elderly.

The only mention of Rathbun during the podcast was when Leah said, “and mike I want to talk about Marty Rathbun one day, we should do a whole show about him“. This is hardly a rallying call for global Fair Game.

As for any twitter mention of Rathbun by Remini, the only tweet located was one she made in response to a follower who sent her a link to Rathbun’s blog where he and his cohorts take pot shots at her and Rinder. Instead of lowering herself to their level and lashing back, she responded to the fan with sarcasm tinged with pity towards Rathbun.

There simply was no attack nor any call to Fair Game the man that can be found.

Rathbun closes with, “Finally, in keeping with the trademark of a sociopath, when all else fails gaslight them.  Her latest tweet on me fits the ASC policy to the tee,” and then references one of his earlier articles which contains links to several equally misleading, dishonest pieces by his new friends.

First on his list is the promotion of one person who is perpetuating a false attack against Karen DeLaCarriere.

It should be noted that in order to support this attack, the perpetrators who Marty Rathbun is encouraging lied about the evidence used.

DeLaCarriere is accused, wrongly, of being a practicing Indie Scientologist. Because she is still practicing, so the claim goes, it makes her a hypocrite, liar and unsuited to call herself an anti-Scientology activist.

To prove this claim, the accusers state they contacted Michael Moore, founder of the Association of Independent Scientologists, APIS, (formerly known as IFS) and that he confirmed that DeLaCarriere was still an Indie Scientologist.

Further proof is offered in the form of a photograph of DeLaCarriere from when she actually was part of the IFS. This photo is being promoted as current and offered as evidence that DeLaCarriere is still offering her services as an auditor.

To her attackers, these things are irrefutable proof that she is lying about her current situation, rendering her fight against COS null and void.

We leave our readers with the following for clarification, followed by the only tweet found regarding Leah Remini and Marty Rathbun. 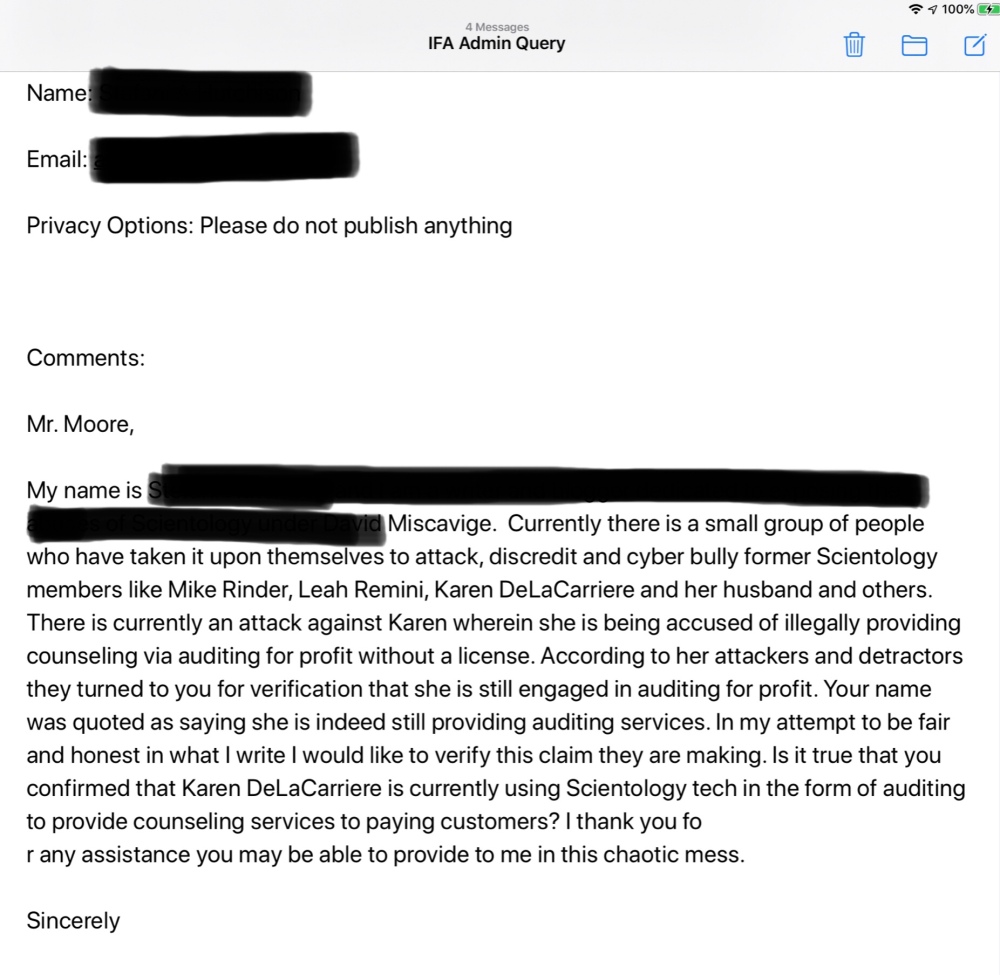 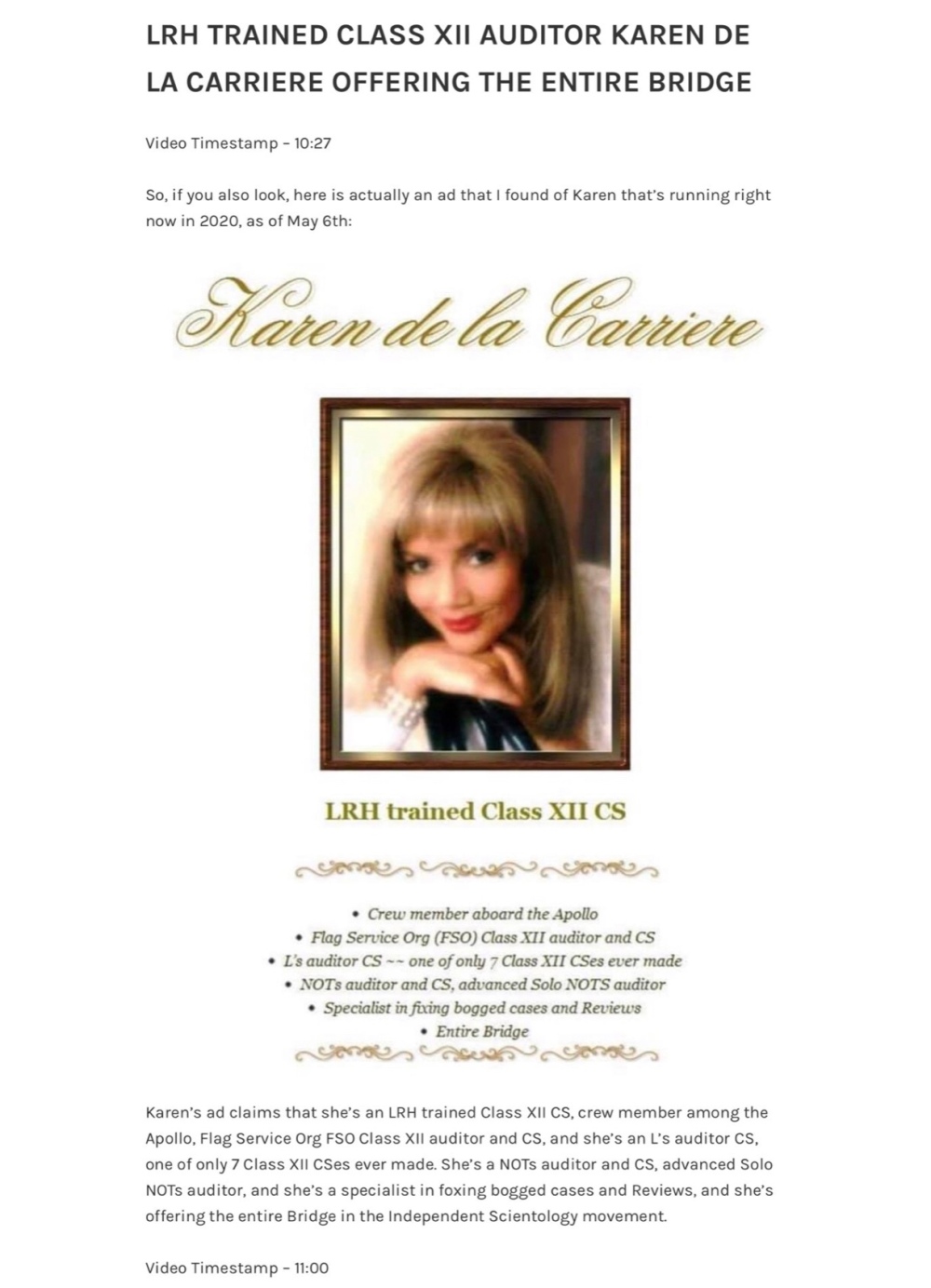 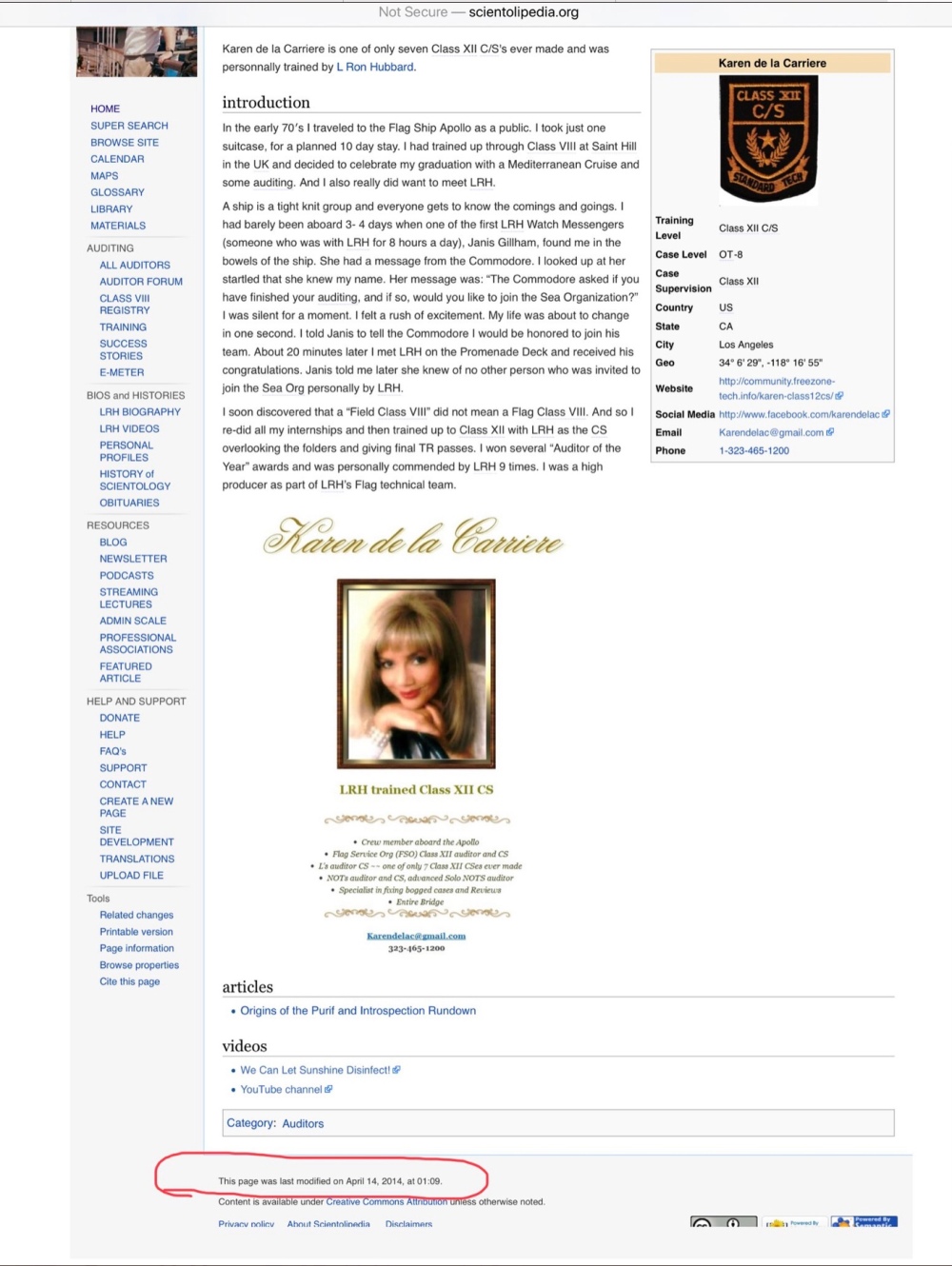 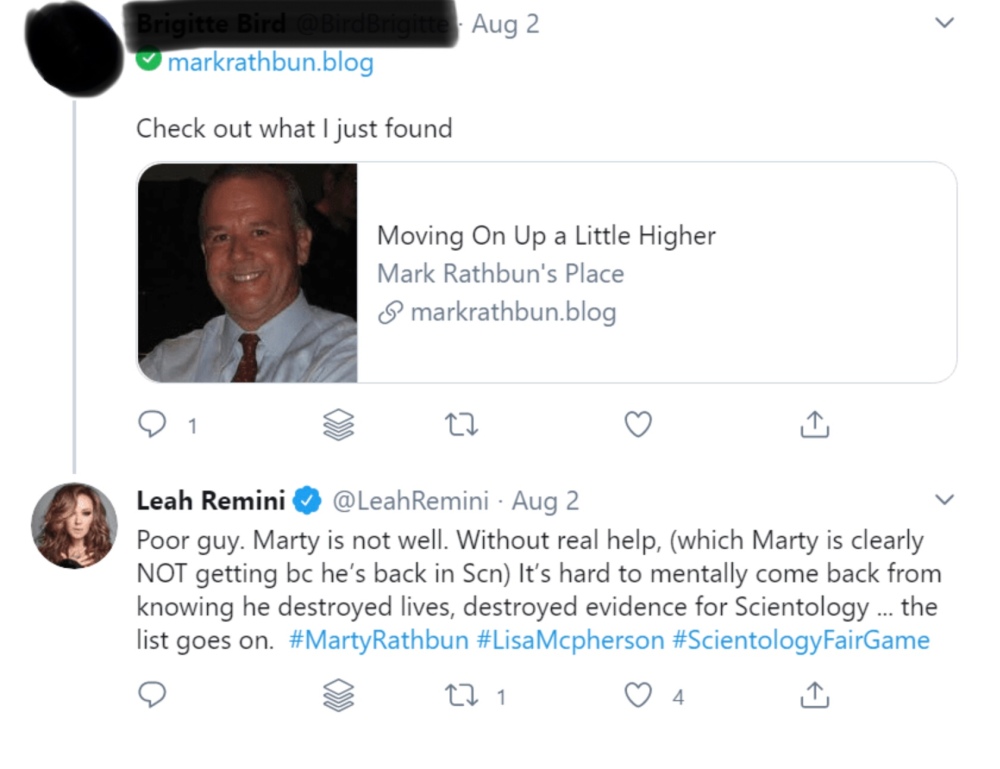