Undeterred by getting publicly snagged, the sketchy lies continue as time and again the cult gets caught doing more of the same.

During the three seasons of Leah Remini: Scientology and the Aftermath COS claimed to have engaged in a non stop letter writing campaign designed to attack anyone even remotely associated with the show.

Stand League has posted numerous letters directed at A&E Network, Disney, individual executives and even sponsors. The OSA account @TarynTeutsch also jumped on the bandwagon, posting their own letters, though this venue was dedicated to getting Mike Rinder fired.

Since The Aftermath ran it’s natural course Remini and Rinder have both continued to work dedicatedly towards exposing the crimes and abuse of their one time cult and Scientology has allegedly continued to write their nastygrams.

One letter in particular, dated June 4, 2020 caught our attention specifically because of the vehemence with which COS defends the honor of their Volunteer Ministers.

Written to the Ombudsman of the Canadian Broadcast Company, the letter writer angrily sneers, “I know that this may be a foreign concept to you, that anyone would ever volunteer to go out of their way to help others with no ulterior motive, but it does happen and good people do exist. And this viewpoint speaks volumes more about CBC than our Volunteer Ministers.”

Considering the number of times we have proven that the Volunteer Ministers go out of their way to stage photo ops and create fictional feel good tales, this immediately triggered us to contact the CBC’s Ombudsman to enlighten him. Especially because of the inference that the VM’s are braver than angels.

Oh this is not happening.

His response was more than telling. 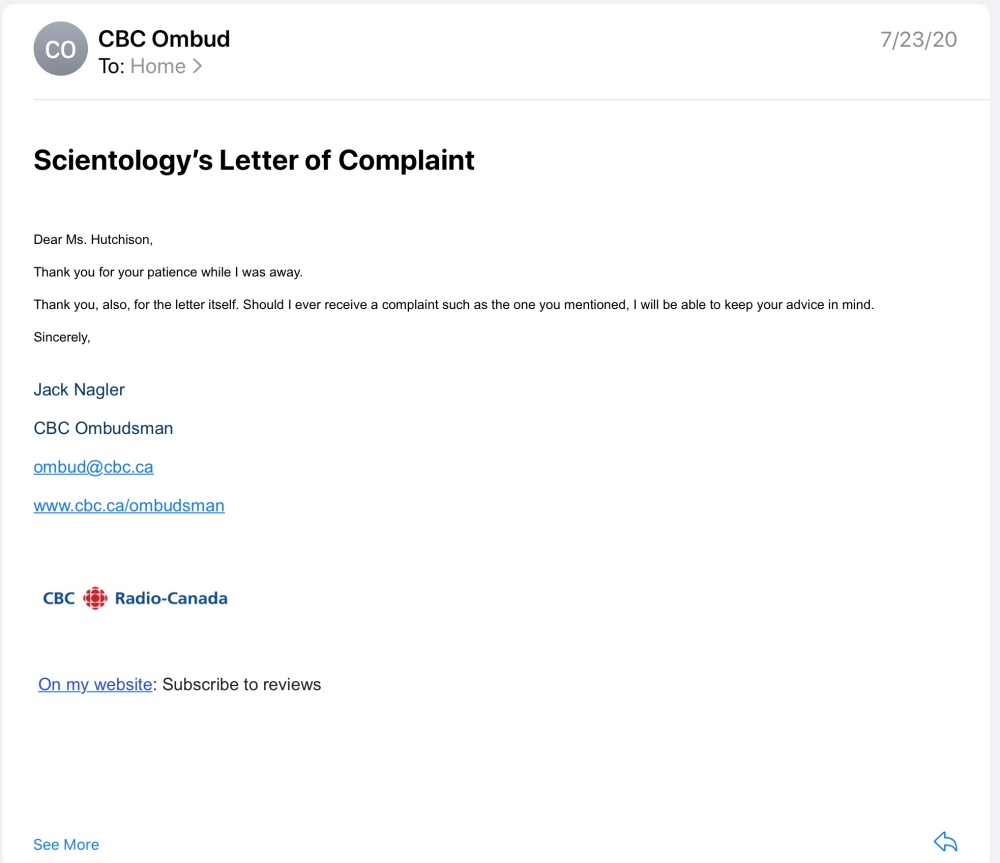 “Should I ever receive a complaint such as the one you mentioned, I will be able to keep your advice in mind.”

For all of Chris Sobolev‘s outraged complaints, he has apparently not seen fit to actually mail the letter to the CBC.

Sobolev’s missive dramatically ends, “What exactly have you done to help people during this pandemic? Besides spreading fear and panic I mean, what have you done?

Waiting breathlessly for your answer.”

Considering Mr. Nagler has not been contacted by Sobolev, we can only hope there is Tech for breathlessness because it’s going to be a very long wait.