Ordained Minister Edward Parkin has lashed out once again at Leah Remini on twitter as part of his church’s Sacrament of Fair Game.

Centered on Scientology’s insistence that they absolutely avail themselves of medical doctors, Parkin pronounces Remini a liar from his Verified Twitter pulpit.

Minister Parkin links to Scientology’s website to answer the question of whether or not members use actual medicine for physical ailments.

“Scientologists seek conventional medical treatment for illnesses and injuries. Scientologists use prescription drugs when physically ill and also rely on the advice and treatment of physicians.

The Church of Scientology has always had the firm policy of not diagnosing or treating the sick. Medical doctors are trained to deal with the physical aspects of illness and injury. A Scientologist with a physical condition is advised to seek and obtain the needed examination and treatment of a qualified medical professional. Independent of any medical treatment, a Scientologist then addresses any accompanying spiritual trauma connected to that condition.”

Book 2, Chapter 5 of Dianetics opens with the statement, “PSYCHOSOMATIC ILLNESSES are those which have a mental origin but which are nevertheless organic.”

Hubbard continues on to claim that, “About 70 percent of the physician’s current roster of diseases fall into the category of psychosomatic illness.”

“Arthritis, dermatitis, allergies, asthma, some coronary difficulties, eye trouble, bursitis, ulcers, sinusitis, etc., form a very small section of the psychosomatic catalog. Bizarre aches and pains in various portions of the body are generally psychosomatic. Migraine headaches are psychosomatic and, with the others, are uniformly cured by Dianetic therapy. (And the word cured is used in its fullest sense.)”

As an aside that cannot be ignored, it should be noted that Hubbard lists bursitis as a psychosomatic condition that can be cured through Dianetics. One can only postulate then that Bitter Bernardini must be PTS at the very least; though as her condition appears to be incurable perhaps she’s a bonafide Suppressive Person.

Dianetics clearly labels the majority of physical conditions as psychosomatic in nature and just as clearly states that the processes Hubbard dreamt up will cure all of them. Chapter 5 completely refutes the pat, sensible statement on the Scientology website.

Most of what the cult releases for public consumption flies in the face of their Hubbardian scripture. Scientology wants the wog world to believe that they are the most honest, ethical and responsible of groups.

As Book One, Dianetics is considered sacred scripture for all members of COS. No matter what is written on their website, Scientologists are expected to accept and practice all of Hubbard’s instructions exclusively and without question or interpretation.

So do they allow the use of medical intervention or don’t they?

He subsequently died of a seizure.

Noah Lottick committed suicide on May 11, 1990 by jumping from a 10th-floor hotel window, the only money he had left was gripped tightly in his hands.

Prior to his suicide he spent $5000 on Scientology courses. Soon after taking these courses, according to his parents, Lottick began acting strangely. Noah announced that his father’s heart attack was “psychosomatic”.

This is relevant to the subject in that it is an active example of the Scientology mindset towards medical conditions.

In 2015 John Cunningham was admitted to a Narconon facility called Bright Future Recovery.

One week later he was dead.

In the subsequent lawsuit it was found that not only had Cunningham been put through a drug free, cold turkey withdrawal from his addiction to Vicodin and benzodiazepines but he’d been taken off his anti depression medications as well.

Hillary Ann Holten was admitted On April 9th, 2012 to an Oklahoma Narconon for treatment. Prior to her arrival, Hillary had been in the ICU at a local hospital for serious medical issues. Having a pre-existing condition that needed specific care including the administration of necessary prescribed medication, her parents spoke at length to the person in charge of the facility, advising the representative of their daughter’s health and needs. They were assured that Hillary would be well looked after, that there were RNs as well as an MD who could manage her care.

Not only did the staff not provide her prescribed antibiotics and cortisone medication for her condition, an adrenal gland disorder, but instead they gave her massive doses of vitamins.

In 1984 Jocelyne Dorfmann, a 34 year old French woman, died from seizures at a French Narconon facility. Medical experts reported that her death was caused by “an epileptic seizure due to the absence of sufficient treatment at its beginning and of emergency treatment during the seizure”

No discussion of whether Scientology utilizes medical intervention would be complete unless one remembers Lisa McPherson. Setting aside her mental condition, McPherson’s physical health had deteriorated to emergency status by the time she died.

Ultimately faced with no other option but to take her to hospital, her guards bypassed the closest medical facility, wasting precious minutes, to take her to a hospital with a Scientology affiliated doctor.

Lisa McPherson was dead on arrival.

These are just a few of the many cases of Scientology neglecting to rely on the advice and treatment of physicians.

We can only surmise the truth surrounding Kelly Preston’s death.

Did she lose valuable time that should have been spent under an experienced, licensed oncologist hoping that Scientology tech would cure her?

Preston was a dedicated Scientologist.

At the death of her son, according to Sam Domingo, both John and Kelly “…did a ‘Bring Back to Life’ assist while Jett was in the ambulance, it’s where you order the Thetan to get back into the body, saying, ‘I command you to get into the body now.’ This is meant to raise them back to life.”

While we will never know the circumstances surrounding Preston’s battle with cancer and ultimate passing, the questions remain.

Based upon historical facts, it can only be concluded that though Scientology may want the public to believe they regularly use proper medical treatment like everyone else, the facts show this is untrue.

Yes the cult resorts to standard medical care, but it appears to be either as a last resort or under fluid conditions.

Time and again it has been demonstrated that in their pride and superiority Scientology members take it upon themselves to judge whether to follow medical directives or impose their own snake oil and window dressing style of care.

Bottom line, Leah Remini is not the liar in this scenario.

Nothing she said was wrong.

Minister Parkin is once again lashing out with absolutely no foundation to his accusations resulting in nothing more than further proof that his title is as empty and rotten as his religion. 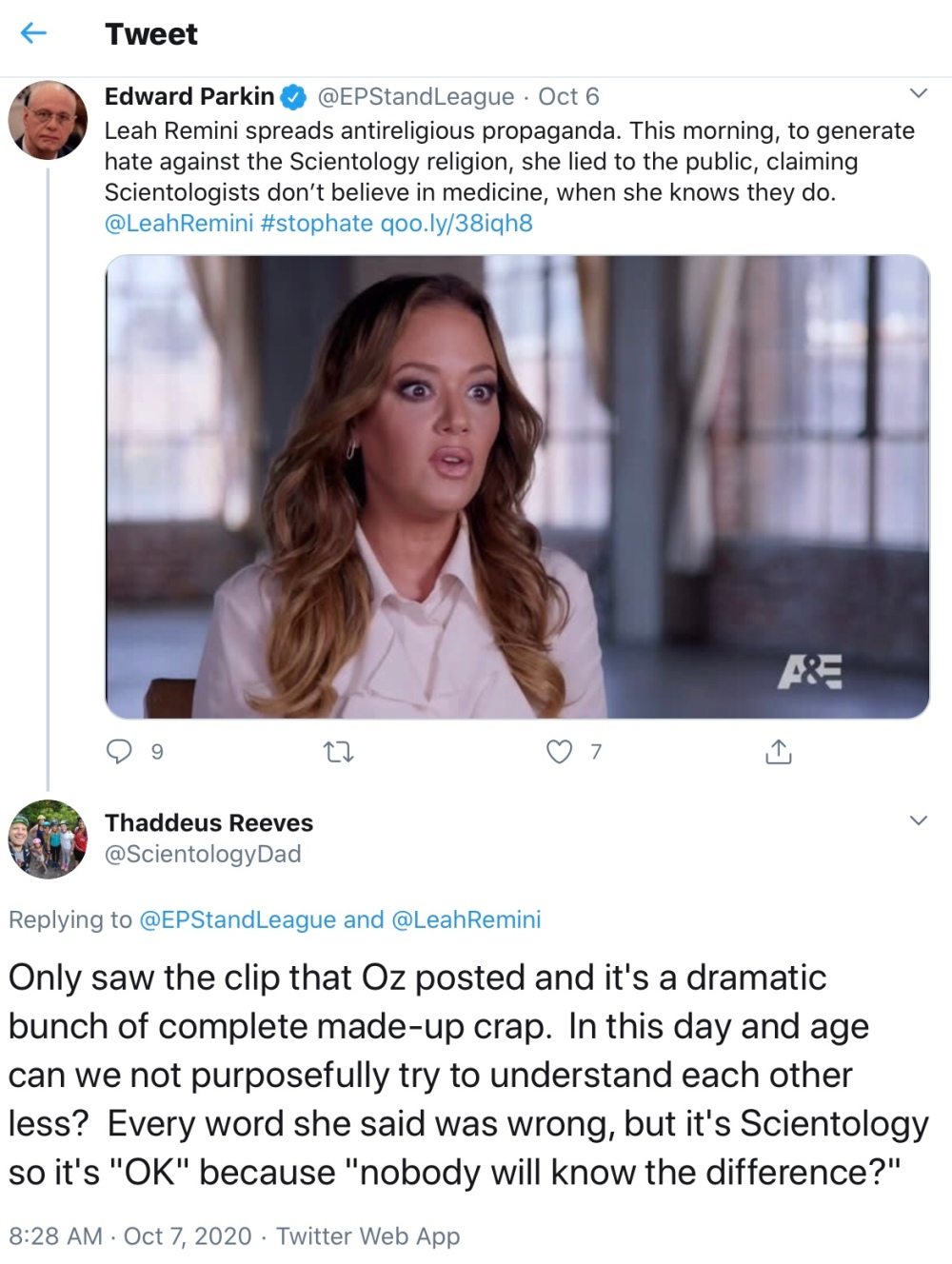