Amidst the confusion and chaos that is the upcoming vote in Yamhill County, OR, Scientologist, Stand League blogger and Portland resident Dylan Green has embraced the opportunity to fair game his enemy.

Dedicated Scientologists are adept at demanding and defending their rights while attacking others when they exercise the same.

Green’s opening comment is intentionally misleading in order to convince his readers she is somehow evilly trampling upon both the freedom of religion as well as one’s right to choose their own candidates.

Leah Remini did not tell anyone how to vote nor did she even make a suggestion as to what one’s religious beliefs should be.

Leah’s tweet was in direct response to a timely and informative article concerning Ward 2 candidate Brittany Ruiz and her connection to Scientology. She did not demand anything but rather asked that people please consider who they are voting for and not vote for someone who cannot be clear about herself. This is not an unreasonable request.

Ruiz’s hesitation to be honest about her affiliation with Scientology is suspicious. If she is still associated with this cult then there is REAL danger Leah is absolutely correct. Policy is clear about making COS look good to the public;

“…you have to go civic, go outside Scientology, get support, organize committees, plot out campaigns, work for outside finance, etc.

“You can and must ally with real humanitarian and civil-rights groups (getting press coverage for every such contact.”

That Ruiz is a former Scientologist is open for debate.

She is still connected to and being supported by many active Scientology members which means she is not considered Suppressive. More than that she is not the only Scientologist involved in the area’s current politics.

Certainly she is playing coy about both her association with the cult as well as her actual beliefs.

How difficult could it possibly be for her to simply state she is no longer a participating Scientologist? Instead this vocal defender of “transparency” has deleted her social media accounts without understanding that the Internet is forever. A search easily uncovers years of her online activity including her now missing Twitter account @brittertwits.

Leah Remini, and more importantly the voters of Yamhill County, are right to be concerned about voting for Brittany Ruiz. The inconsistencies and questionable deflection of her past should leave people wary.

Newly missing social media, allowing the belief she is being unfairly, religiously persecuted while never clearing up the issue, supported by Scientologists yet claiming she is a Christian…

Ruiz has been an active and vocal supporter of the anti-vaxx movement yet claims to be an advocate for children.

She seemingly refuses to definitively address the Scientology issue which begs the question; is she or isn’t she a Scientologist?

Ruiz called herself a Christian in one interview yet how can this be if her favorite book is Dianetics?

Actions speak louder than words and if Ruiz is a former Scientologist she is certainly acting otherwise.

Why should Leah Remini be attacked for voicing serious concern for the McMinnville community? Remini has no dog in this fight. She is not a voter or resident of Oregon but she cares about people’s rights to be fully informed. Does Remini not have the right to express her opinions? Especially during something as important as a political campaign? Why do Scientology and Dylan Green get to deny Leah her freedom of speech? Note that this is consistent, typical Scientologist behavior and is not limited just to Green.

Scientology’s go to defense is that anyone who challenges them is labeled a bigot and attacked. That is what Dylan Green is doing.

If Brittany Ruiz is not a Scientologist why is the cult going to such lengths to support and defend her? Stand League did not write any blogs defending Amy Coney Barrett when the question of her Catholicism was brought up.

Even if she is no longer an active member of the cult there are some serious questions about her past actions that bear scrutiny.

Scientology practices the policy of Disconnection. Ripping families apart, forcing spouses to divorce, tearing children from parents and setting family member against family member is completely counterintuitive to any claims of children and family advocacy.

How can a Scientologist, who is expected to practice Hubbard’s “sacred scripture” exclusively and without question work effectively with McMinnville’s ORDINANCE NO. 5097 stating the “City of McMinnville wishes to create a standing diversity, equity, and inclusion committee that will advise the Common Council for the City of McMinnville on policy decisions through a diversity, equity, and inclusion lens, among other purposes and duties”?

Scientology is infamously known for it’s support of California’s Proposition 8 and Mike Rinder has addressed the cult’s homophobia on his blog.

“You are not qualified to join the Sea Org if you are gay. Period.

You are not qualified to join the Sea Org if you have an “extensive history” of “homosexual acts” even if you claim you are not “gay.”

In fact, this is so well known that people have blown off Sea Org recruiters by claiming they are gay. They are dropped like hot potatoes.

Actually, they are dropped if they have “gay thoughts.”

Executive and HCO qualifications in any scientology organization require that you have no history of “perverted 2D activities.” And that most definitely includes “homosexual activities.”

Ruiz’s ability to be an effective representative for those who vote for her is seriously in question and citizens of McMinnville need to take heed.

If honesty and integrity are requirements for the people of Yamhill County, then perhaps they need to consider her claim of being a Christian.

Dylan Green has outed Brittany Ruiz’s relationship to Scientology quite nicely, proving she is lying about who she is.

“Leah Remini, who has nothing to do with Oregon or any of its municipalities, recently posted a notice for residents of that area to ‘not vote’ for this candidate as she is running to ‘secretly represent’ her religion (which happens to be Scientology) and other such false and venomous rhetoric.”

So there is it in black and white courtesy of the Stand League.

Brittany Ruiz is not a Christian, she is a Scientologist and is embraced, supported and defended as such. One might ponder why someone is so ashamed of her religion that she would work this hard to distance herself from it, even to adopting a completely different faith.

Leah Remini has only offered her heartfelt concern over a candidate who is obviously having trouble being honest or transparent with the potential voters.

This isn’t a sign of hate or bigotry. Rather it is just further evidence of the Leah Remini we have all seen since she wrote Troublemaker. A woman who is dedicated to the truth and to protecting people from harm. 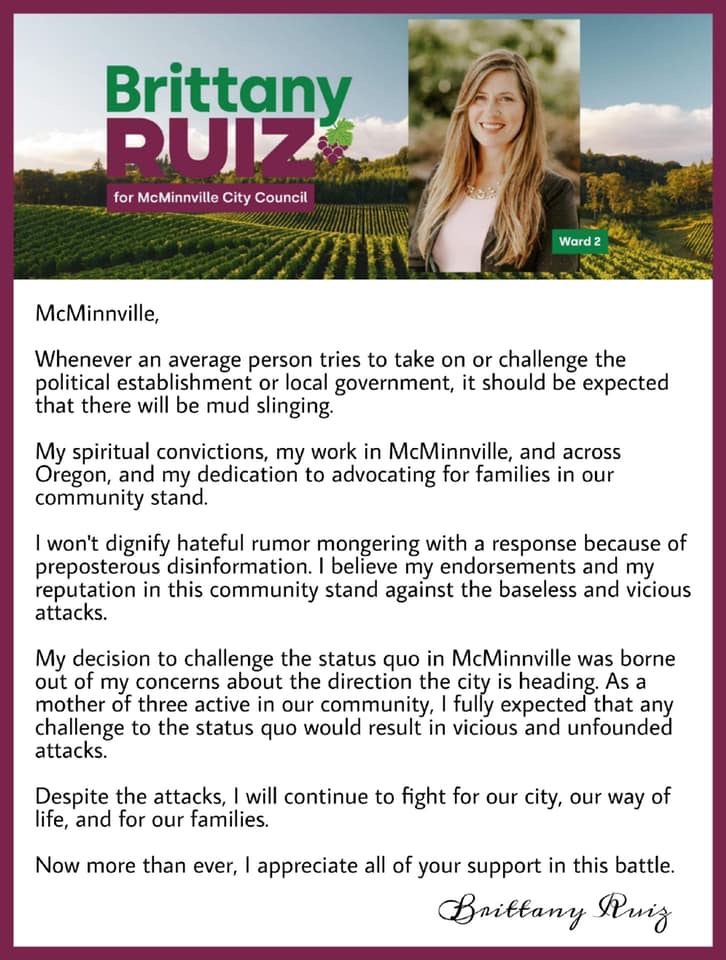 One thought on “Scientology Has Publicly Outed Brittany Ruiz”