Posted on December 18, 2020 by Stefani Hutchison

Gentle and beautiful as a soft Spring rain, fierce as a dark Summer storm.

Infinite in their magic words can build, heal and create and just as easily rip, tear and sunder.

More powerful than any weapon, capable of utter destruction. When wielded by one bent on evil, words are daggers that slice through truth resulting in confusion and deceit.

Words are like fire, they just are, neither good nor bad until their creator bends them to his will. Only the author decides whether the result will be life giving warmth or a deadly conflagration.

Maya Angelou’s expressions danced. Uplifting, meaningful, intended for introspection, joy and beauty, her use of language was a gift to the reader.

L. Ron Hubbard’s pen was a hammer of hate.

Revenge and lies flowed, shaped upon the anvil of paranoia.

Consuming all in their path, Hubbard’s words teach darkness and suspicion. He lit a fire with his writings, dark version of the purifying blacksmith forge.

Truth is burned away in Hubbard’s malicious flame until only twisted slag remains.

Where words have been misused, so too can they be used to restore.

No better armament exists to counter lies than truth.

Once again Scientology has launched flaming arrows of fiction at Mike Rinder.

Purposefully misleading their readers as to the intent of a comment in a blog post from 2017, OSA attempts to make Rinder appear to be guilty of “Nazi-like rhetoric”.

Stand League says “After @MikeRinder was exposed for his Nazi-like rhetoric, likening Scientologists to ‘rats’ needing to be ‘wiped out,’ he swore he had never said it.”

Mike Rinder actually wrote, “Scientology continues to operate on the principle ‘never defend, always attack’ — even though they are like cornered rats and will ultimately be wiped out entirely because they are such menacing, antagonistic and rabid vermin. They cannot change because it’s all laid out in their own policy.”

One manipulated word is all it takes to completely change meaning and intent.

A single misplaced verb added to a sentence makes Rinder look as though he was advocating for violence.

It doesn’t help that Ordained Minister Edward Parkin also omits any context, creating the illusion that this is a stand alone comment.

It is not true

Could this be an educational deficit rather than an intentional misunderstanding?

If either were true, they would still offer small excuse for his deliberate lies.

Facts are that Minister Parkin is purposefully misinterpreting what Rinder wrote in order to create outrage and confusion.

Mike Rinder did not say that Scientology needed to be wiped out like rats.

What he did do was employ a commonly used writing tool known as an analogy.

“A similarity between like features of two things, on which a comparison may be based.”

The opening paragraph of this article is peppered with analogies.

Minister Parkin may just as well announce that this writer stated that L. Ron Hubbard was a blacksmith.

Rinder compared Scientology’s angry, desperate lashing out as being like cornered rats.

Cornered rats may bite, claw and squeal, but eventually the exterminator will kill them.

Scientology’s policies of attacking others is becoming less and less of an obstacle for people who want to stop the plague like spread of their crimes, lies and abuse.

Eventually Scientology’s own paranoia and hate will be their downfall.

Mike Rinder is correct in what he said.

Membership is declining, more and more real estate is sitting boarded up and empty while Miscavige plays an infantile game of Hide and Seek with process servers.

Stand League’s tweet is yet another example of their desperation.

A simple check on the Internet Archive of the original 2017 article shows it is identical to the one seen on Rinder’s blog today.

This verification also preempts Taryn Teutsch’s claim that her father “will be deleting any evidence of his own wrongdoing and denying any of it ever happened.”

One cannot delete what doesn’t exist in the first place.

Creepy Eddie took an innocuous analogy and deliberately changed its context into something sinister.

This is classic Scientology in action.

Words are a weapon and truth is subjective in Hubbard’s written policies for Keeping Scientology Working.

COS insists that it is not just a religion, but THE MOST ETHICAL religion on the planet. How ethical is bastardizing the words of another in order to ruin their reputation?

Never Ins need to beware of every word Scientology utters.

Scientology’s Stand League states that Mike Rinder has, Nazi-like, announced that the cult needs to be wiped out.

Holding Stand League’s accusations to the purifying fires of truth exposes their underhanded malice and proves beyond doubt that, in fact, Rinder said nothing of the sort. 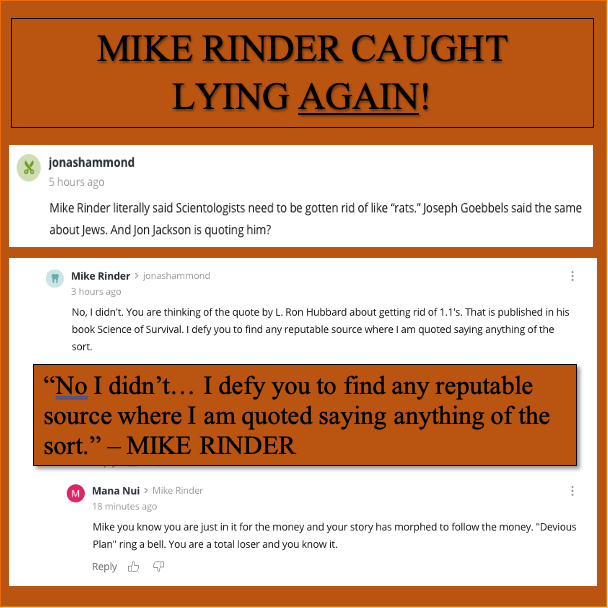 3 thoughts on “Fighting Fire With Fire”