“References to mass murder, violent events, or specific means of violence where protected groups have been the primary targets or victims
We prohibit targeting individuals with content that references forms of violence or violent events where a protected category was the primary target or victims, where the intent is to harass. This includes, but is not limited to sending someone:

• media that depicts victims of the Holocaust;”

“We prohibit targeting individuals with repeated slurs, tropes or other content that intends to dehumanize, degrade or reinforce negative or harmful stereotypes about a protected category.”

“Our mission is to give people the power to build community and bring the world closer together. To help advance this mission, we provide the Products and services described below to you:

Combat harmful conduct and protect and support our community:

People will only build community on Facebook if they feel safe. We employ dedicated teams around the world and develop advanced technical systems to detect misuse of our Products, harmful conduct towards others, and situations where we may be able to help support or protect our community. If we learn of content or conduct like this, we will take appropriate action – for example, offering help, removing content, removing or restricting access to certain features, disabling an account, or contacting law enforcement. We share data with other Facebook Companies when we detect misuse or harmful conduct by someone using one of our Products.”

“We define attacks as violent or dehumanizing speech, harmful stereotypes, statements of inferiority, expressions of contempt, disgust or dismissal, cursing, and calls for exclusion or segregation.”

Scientology learned this art from their master, L. Ron Hubbard.

Hubbard’s policies on revenge, instruction on how to properly attack and destroy others, the raising of children filled with guilt and shame. These are only a few examples of the psychological, spiritual, emotional and physical destruction embraced by the Scientology “religion“.

Scientology’s abusive doctrine is also directed outward into the community of non-members creating pain and suffering in anyone unlucky enough to become a target.

Abuse is the cult’s global gift to the planet.

Hubbard’s toxic offering to society spreads negativity, chaos, anger and suspicion through multiple front groups. Each of these groups claims independence from Scientology’s control but it is time to call a spade, a spade. Time to stop treating this cult as though the hateful actions of separate cells are not in fact the hateful actions of a single cancerous entity.

Social media has become the new playground for Scientology’s bullying and torment.

Twitter and Facebook have provided fertile ground for the dispensing of propaganda designed to dehumanize their chosen targets.

Public platforms have enabled Scientology to create multiple accounts under various names in order to present the idea that many different entities are all weighing in against “injustice”.

Thus far these companies have shown absolutely no interest in a zero tolerance approach to Scientology’s actions. Their policies against such rampant, overt abuse appear as empty intentions, mere suggestions, rather than serious concern for the creation of a safe environment.

People have a right to emotional safety.

Ostensibly this is exactly why policies are created in the first place, though rules, however well intentioned are utterly useless if they are not enforced.

Scientology utilizes inflammatory rhetoric such as the consistent claim against Mike Rinder and Leah Remini of “Blood on their hands” in order to incite others into an outraged frenzy of anger and hate.

The fact that neither had anything whatsoever to do with the fatal stabbing that took place in Australia in 2019 means nothing to Facebook or Twitter Support. This oft repeated lie is permitted to continue, an emotional, caustic acid attack intended to reduce two innocent people to abhorrent criminals.

So too the use by Scientology of provocative imagery such as photographs of weapons, bullets and Nazi propaganda. These images have no other reason but to incite hate.

By aligning Leah Remini, Mike Rinder and Yashar Ali with Nazi images and statements the intent is to dehumanize them, to associate their names with the basest evil. Make onlookers believe that the immorality of Hitler, Goebbles and the Nazi regime is synonymous with Scientology’s victim du jour. Creating this false impression demonizes the person, lowering them in the public eye thereby reducing them to worthless individuals. Such dehumanization casts a person into the image of an “enemy”. It whips viewers into an “us verses them” mentality.

Once this connection is made, one feels justified in lashing out, attacking and, to use today’s terms, cancelling these targets.

It is bizarre that in the current culture of demanding accountability for abuses and misdemeanors both past and present neither Facebook nor Twitter feel it necessary to hold Scientology’s feet to the fire.

Ellen Degeneres was rightfully raked over the coals of public anger for allowing an abusive, toxic workplace. Scientology in its various iterations creates the same ugly, abusive environment across social media using targeted harassment, outright lies and dehumanizing psychological terrorism against innocent people yet there are no consequences.

Casual perusal of the various accounts on Twitter show similarities too numerous for coincidence.

The same photographs and posts can be found under different names:

Egregious hateful imagery interspersed with vicious abusive, dishonest stabs at the same targets over and over. Were this behavior to appear under any other group, individual or organization the account would be removed posthaste without even a by-your-leave. 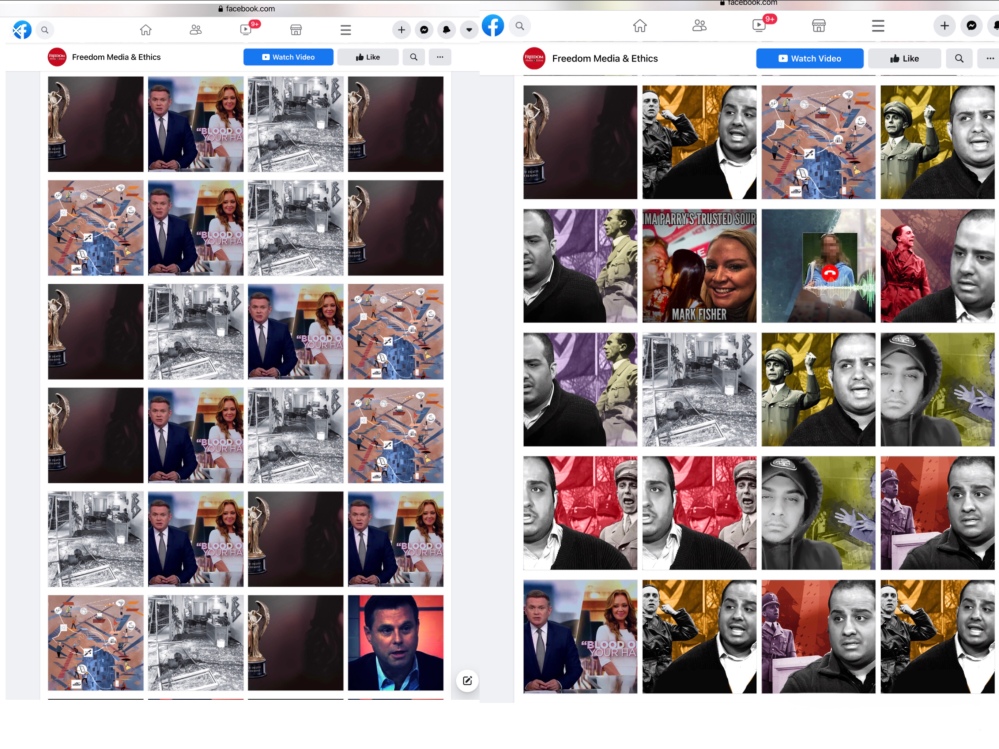 The level of emotional terrorism being inflicted by SCIENTOLOGY is far above and beyond anything except for intolerant hate groups like white supremacists or political fanatic factions.

Facebook and Twitter both are harboring a hate group intent upon destruction. They are accessories to the pain, lies and malice being hurled at innocent people and need to be called out for their refusal to stop directed abuse in order to provide emotional safety to their users.