“The internet trolls who harass people because of their religion are utterly devoid of any real knowledge of the religion and the individuals they are harassing. Ask the tormenters what they actually know about any given religion and they’ll spew and foment and bloviate but they won’t be able to say anything true. They can’t. They don’t know. And I strongly suspect they don’t want to know. People like this revel in ignorance and make it a mission to spread lies. They don’t ‘mean well.'”

Scientology has the unique ability to disconnect itself from the hate, bullying and abuse they inflict on others, justifying it as something moral and noble in the quest to create a new society.

In spite of the sanctimonious preaching, they don’t mean well.

Scientologist Michael Scandling has written an article for Stand League’s blog presuming to teach and inform his readers about religious bullying, especially online. He is careful to point out how the statistics of religious harassment have grown thanks to the Internet. Scandling accompanies his hypocritical homily with a likewise hypocritical picture to highlight his case.

Scandling writes, “I’ve gotten my share of this as a Scientologist. But offer them some actual information and the jerks just spew and foment. Or run away. The facts might confuse them, apparently.”

Scientology doesn’t offer actual information or facts. They manipulate and misdirect, hiding the realities of their abusive doctrine from prospective members and even their own public parishioners.

In fact the reverse of his statement is the reality. Every single time a Scientologist is confronted with the ugly, abusive, uncomfortable facts of their group they go to extraordinary lengths to escape the truth.

Scientologist fanatic Ryan Prescott, wannabe author who produces primary level writings of hate and outright lies, is one excellent example of a jerk confused and afraid by facts.

Prescott told us that he was a Christian who had just attended his 100th Christian church service. He gushed over how inclusive and permissive Scientology is concerning other religions and how much he enjoyed the service. When we asked him how he reconciled Hubbard’s clearly anti-Christian teachings, showing him LRH’s quotes concerning Jesus, he recoiled in offended shock. 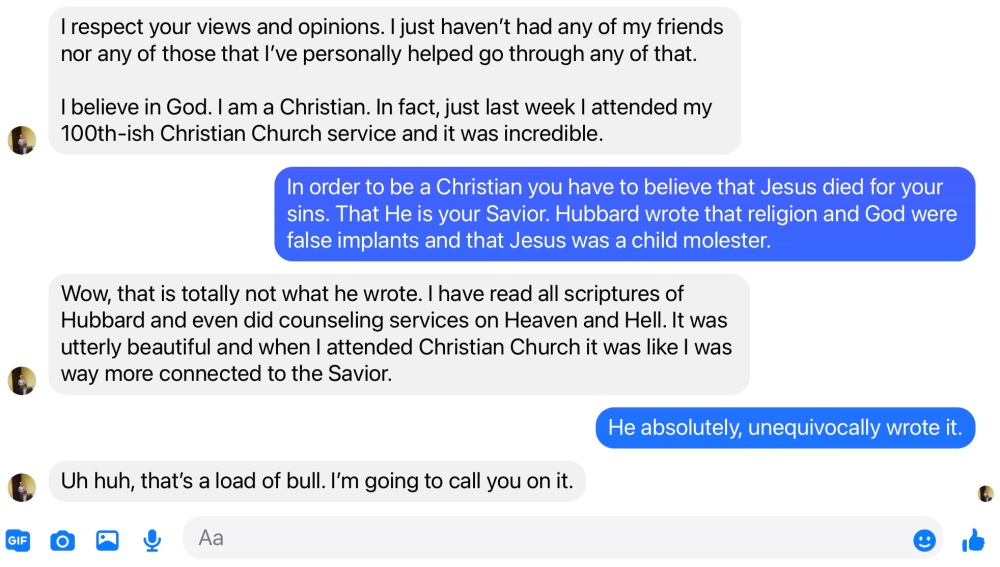 Prescott also claimed that Scientology detractors have learned how to copy L. Ron Hubbard’s style of writing, thus enabling them to create fake documents designed to make Hubbard and Scientology look bad. In this way he is able to dismiss the truth and justify his abusive behavior.

When he was provided with the source information so he could see the truth for himself, he blocked us. “People like this revel in ignorance and make it a mission to spread lies.”

During the airing of Leah Remini- Scientology and the Aftermath Scientology consistently, categorically denied absolutely any claim leveled against them, yet they refused to participate in the show in spite of numerous invitations.

Worse, rather than address multiple accusations of serious abuse, Scientology systematically engages in the very cyber abuse Scandling presumes to preach against in his article.

Michael Scandling opens his piece by sharing what is presumably an experience he had as a boy.

“When I was a kid, I went to summer camp. And I came from a nonreligious household. Disconnected facts? Six days a week, yes. But on the seventh day came harassment. That’s another word for bullying.

The camp had mandatory religious services. The Catholics went to Mass in a local church in the morning. The rest of the camp went to a nondenominational service in The Lodge in the afternoon. Everyone, that is, but me. Not knowing where to go, I went to neither.”

First one might wonder why, if his home was not religious, his parents chose to send him to a camp who had the attending of religious services as a requirement. Further, the boy was obviously not given any parental guidance on how to handle such a situation leaving him struggling on his own.

Allegedly, because he attended no Sunday service, he was subsequently bullied by his fellow campers. “How many? About 20%. That works out to about 40 campers letting me know in no uncertain terms and with as many people listening as possible that I was going to Hell, and in some cases backing it up with physical abuse to hasten the trip. I was working for the devil. Or more likely I was the devil.”

Scandling seems to still carry some issues from his childhood that haunt him, Hubbard’s auditing is apparently not working.

Ironically, Scandling’s article, intended to convey the idea that bullying and abusing others over religion or any other reason is wrong, fails to achieve it’s goal in light of his church’s public treatment of others.

“I’ve seen this all my life and I know that similar bullying has gone on throughout recorded history. It has started wars. It has destroyed civilizations.”

Scientology uses it to destroy people.

Scandling self righteously preaches against the biggest weapon in his own church’s arsenal.

“Now anyone, anywhere can blast a barb by tapping SEND and in fractions of a second, it’s all over the world.”

Exactly like the nasty and false claims that Leah Remini is responsible for arsons and murder.

Precisely like Taryn Teutsch lying to the world that Mike Rinder physically assulted Cathy Bernardini leaving her an invalid for life.

Michael uses the story of his “childhood experience” in order to try and make his audience more sympathetic to his message. This sympathy disintegrates when one considers the whole picture; at the same time he is exhorting people against cyber bullying Scientology is engaged in psychological warfare of the worst kind. There simply is no way to integrate the two actions.

Scandling’s resolution for the situation is to “just drop it”.

“It takes individual action. Or inaction: the simplest thing to do when some bit of hate comes your way is to kill it by not passing it on. Not even a little bit. Not even to your friends with a ‘Look at this. Isn’t this disgusting?’ Just drop it. A phenomenon that exists only because of attention cannot continue without attention.”

Yet when Twitter Verified Ordained Minister Edward Parkin body shamed Leah Remini, other Scientologists couldn’t wait to jump on the bandwagon and add their comments.

Neither Facebook nor Twitter are conscientious enough to drop it. They too are accomplices to the spreading of abuse by their refusal to enforce the very policies designed to create safe online environments for all.

What he’s carefully ignoring is that his message is overshadowed by the egregious abuse committed by the organization he is presuming to speak for. Before he can remove the speck from the public eye, it would be best to put the stone down and address the giant plank in Scientology‘s own.

One thought on “Those Who Can’t Do…”