L. Ron Hubbard was an insistent proponent of reaching young children with Scientology’s doctrine and ethics. He saw this as an excellent way to influence youngsters early and thoroughly in order to bring up a new, obedient and compliant generation of Scientologists.

As has already been noted, Dohring and his fellow Scientologists attempted to achieve the goal of including COS beliefs in the game play of the popular NeoPets website in the early aughts. Subsequently Dohring went on to target children by creating Age of Learning and ABCMouse.

Now it would seem that in spite of Age of Learning’s criminal run in with the FTC Boston Children’s Hospital is onboard with Dohring’s company to provide educational curriculum virtually to children.

Never Ins constantly ask what they can do to help expose Scientology and it’s abuses. I ask you all to please take a few moments and reach out, politely and civilly to Dr. Rich and BCH to ask them to reconsider this involvement.

The following email went out this morning. This is the kind of work needed to expose Scientology and protect others from their dishonest, abusive spread.

My name is Stefani Hutchison. I am a writer and blogger dedicated to exposing the abuses of Scientology.

It was with great concern that I recently saw a Twitter announcement that you and Boston Children’s Hospital Digital Wellness were partnering with Doug Dohring and his Age of Learning company.

In the early 2000s Dohring was an investor and CEO of the popular NeoPets company. During his tenure he introduced an unethical Scientology driven management curriculum into the workplace, hired fellow Scientologists and ultimately attempted to introduce Scientology beliefs into the gameplay thus exposing millions of children to the cult’s doctrine.

After Dohring sold NeoPets he founded Age of Learning, ABCMouse and other children focused companies.

In September of 2020 Dohring was found guilty of criminal and unethical actions and subjected to a $10 Million fine by the FTC for their billing practices as Age of Learning and ABCMouse.

In his statement, FTC Commissioner Rohit Chopra refers to Age of Learning as practicing “Dark Patterns”, saying; “Dark patterns are the online successor to decades of dirty dealing in direct mail marketing.” Chopra also referred to Age of Learning as a “Roach Motel” easy to get in but impossible to leave.

“ABCmouse was undoubtedly a roach motel. Through the dark patterns detailed in the FTC’s complaint, ABCmouse deployed tricks to lure families into signing up for its service, and traps to prevent them from cancelling. First, ABCmouse tricked consumers with a “12-month” membership offer, without disclosing that this membership would automatically renew. Instead, the company buried this information in its “Terms and Conditions,” which were accessible only if users clicked a hyperlink. Even those families that did click the link would have struggled to learn the truth, which was concealed in small, dense text. Unsurprisingly, these problematic practices prompted tens of thousands of families to file complaints.”

The full legal documents concerning this case can be seen here: https://www.ftc.gov/enforcement/cases-proceedings/172-3186/age-learning-inc-abcmouse

It is also important to note that Dohring contributes multiple millions of dollars to Scientology which in turn go to help fund the abusive, harmful, even potentially dangerous actions the cult embraces.

As a pediatrician you should know that very young, still developing children of Scientologists are put through the cult’s “Purification Rundown “. This regimen is made up of unproven, unregulated junk science and poses a serious health hazard to the adults who undergo it, let alone the still developing bodies of children as young as 5 years old.

Children in Scientology are considered “adults in small bodies” and so are administered the same massive doses of niacin, vitamins, minerals, Cal-Mag and cooking oil as the grown participants. They are made to spend dangerously extended time in a sauna; for up to five hours at temperatures of up to 170F, this is ten times longer than the recommended maximum. This poses major risks for health; such an extended period of extreme heat can easily lead to hyperthermia, heat exhaustion, salt or potassium depletion, heat stroke and breathing difficulties, which could prove highly dangerous for asthma sufferers. Added to this are periods of running, also to help induce sweating. Combined this procedure is supposed to drive “stored” drugs out of body fat. Scientology explains that toxins and drug residue (prescription and street drugs) are stored in the fat and can flare back up even years later causing issues. For example they teach that LSD is stored in the fat and even if a person becomes sober the stored LSD can suddenly reappear later in life causing the same drug induced effects such as hallucinations.

The Purification Rundown is the primary treatment for their bogus drug treatment facilities, called Narconon, (not to be confused with Narcotics Anonymous), and teens are treated at these facilities. Examiners for The State of Oklahoma reported in 1991 that “The use of high amounts of vitamins and minerals in the amounts described administered by Narconon can be potentially dangerous to the patients of Narconon according to the more credible medical evidence …”

L. Ron Hubbard recommends dosages well above any safe limits, in some cases as much as 142 times more than the toxic level.

The dosages given to children are as follows:

Again, these supplements are administered along with a Cal-Mag drink and doses of cooking oil, meant to “replace” the fat lost during the detox process.

The dangers to pediatric bodies cannot be overstated. Electrolytes imbalance, dehydration, nausea, vomiting and diarrhea are just the tip of the iceberg as far as the risks go. Determining the number of ER visits by children suffering from this Purification Rundown is impossible as Scientology parents would absolutely not reveal that their children had been involved in this regimen rather a safe cover story would be provided in order to protect Scientology at all costs.

According to a 2013 article in CardioSmart concerning mega doses of Niacin in regards to cholesterol lowering,“researchers found that the niacin/laropiprant treatment was not effective in reducing risk for heart attack and stroke. In addition, this treatment caused a number of serious complications, such as bleeding, infections, diabetes, skin issues, and gastrointestinal problems.”

Dr. Rich, I wanted you to be very clear and aware about Doug Dohring, Age of Learning and the cult Dohring embraces, financial supports and disseminates. Scientology teaches their children that anything bad that happens, including illness, molestation or accident is their own fault. A result of hidden crimes committed in past lives. Children are raised in shame, guilt and silence.

Given the slow but steady tide of information and turning opinion concerning Scientology and their psychological terrorism, human trafficking, child abuse, financial fraud and more one cannot help but be concerned that a prestigious and respected organization such as Boston Children’s Hospital would in any way find themselves connected to Dohring, Scientology or Age of Learning.

Such patronage offers a clear public endorsement by BCH that Dohring and the organization he so publicly and financially supports is an appropriate and legitimate partnership.

I beg you and BCH to seriously reconsider this interaction given the full scope of the character of Dohring as well as his particular association to Scientology. 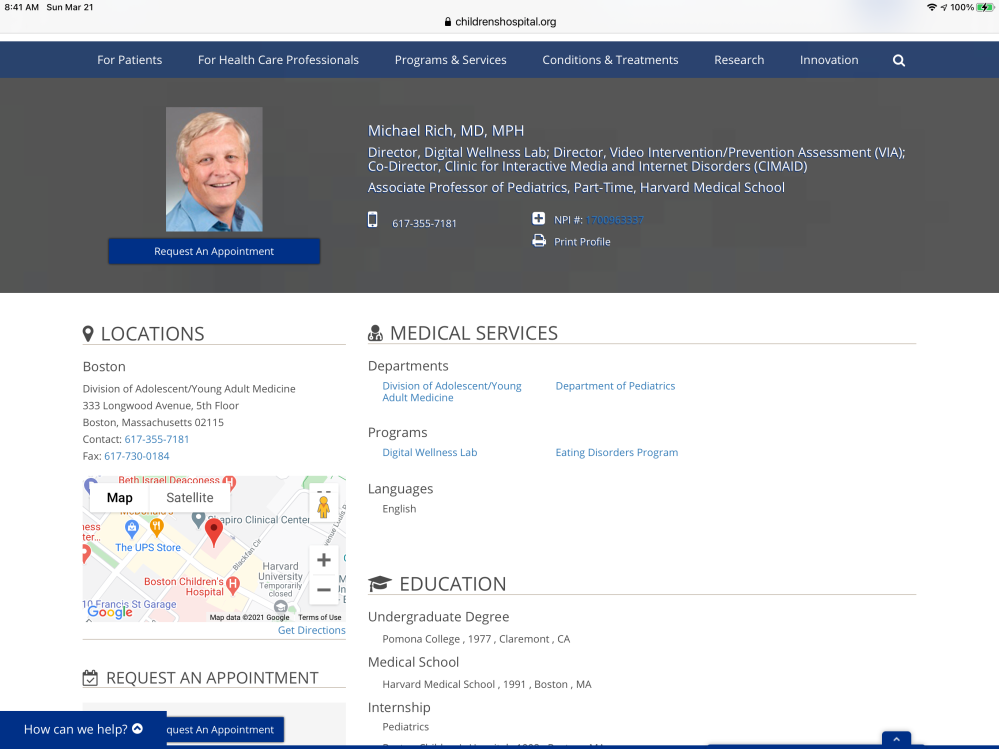 One thought on “Boston Children’s Hospital Partners with Doug Dohring”